Solo Show 26 January - 23 February 2019 Galerie Alain Gutharc, Paris Text : Julie Crenn Jean-Baptiste Janisset creates sculpture in the field. He molds and collects on site elements: sculptures, objects and bones. His approach feeds on travels and encounters. For instance, the artist has walked the streets of Nantes in search of visible traces of colonialism and slavery. It was in Nantes also that he discovered an emblem of Anne of Brittany on the bottom of which was engraved: “A ma vie” (to my life). The artist molded it on site and made a plaster copy. In a crossroad of Zinguinchor, Senegal, he molded part of a tribute sculpture to Aline Sitoé Diatta (1920-1944), a member of the resistance in Casamance nicknamed the “African Joan of Arc”. The young woman was said to have received a prophecy and heard voices telling her to help Casamance become independent. Guided by the voices, she initiated a movement of disobedience and led riots. Aline Sitoé Diatta was arrested, judged by the French administration and deported to Mali. She died of scurvy at the age of 24, and is now considered a martyr. The works of Jean-Baptiste Janisset conjure up and intertwine complex narratives. The artist questions the writing of collective history and how conscious we are of it. Who do we pay tribute to? What should we commemorate? Which icons, for who and why? Contexts inevitably impact the way we see collective history. The artist’s molds thus create new objects, the archive-sculptures of an ongoing research. Jean- Baptiste Janisset challenges the making of memory, monument and history. He immerses himself in the daily and spiritual life of places from Nantes to Libreville via Senegal, Italy, Algeria and Corsica. “I want to tell a story, a sort of syncretic awakening.” The sculptures have several reading levels. A research around beliefs and religious practices is superimposed on colonial history, which architectural and sculptural vestiges the artist appropriates. Jean-Baptiste Janisset molded the bones of an ox sacrificed during the Magal ceremony in Touba, Senegal. The city of Touba was founded in 1886 by Sheikh Ahmadou Bamba Mbacké (1853-1927), a mystic, ascetic and pacifist Sufi Muslim preacher. Considered dangerous by the colonial administration, he was imprisoned and deported to Gabon then Mauritania. His beliefs and life laid the foundation of a new religion. The Magal ceremony (which means “to celebrate, to pay tribute” in Wolof) commemorates the forced exile of this spiritual guide. Jean-Baptiste Janisset took part in the ceremony and sacrificed an ox, which was then collectively shared. The artist also molded the carcass of a sheep sacrificed during Eid al-Adha in Algiers, Our Lady of Sorrows at the Saint-Roch Church of Ajaccio, and a Nostradamus bust in Salon-de-Provence. Beliefs are gathered within a same space and approach without hierarchy. The exhibition A ma vie is a work of art itself. For Jean-Baptiste Janisset, it is like a cenotaph: an empty grave, a funeral monument conceived to pay a tribute not only to an intercultural cosmogony, but also to a collective memory filled with heroes, heroines and martyrs. The artist draws from his own experience, his own consciousness of memorial wounds. A fragmented memory, full of things unsaid, violence, resentments, guilt, secrets and shame. The works constantly alternate between a form of gentleness and a latent violence. Life and death struggling in a land of hybrid beliefs. A sound piece ( made in collaboration with Tim Karbon ) combines songs from Corsica with poems by Sheikh Ahmadou Bamba Mbacké delivered by a Senegalese marabout and friend of the artist. The sculptures, which can be enhanced with LED lights, are made of lead (a substance that blocks waves and intoxicates if we touch it), plaster, zinc and copper. In an animist approach, the artist wants to imbue his works with a certain energy and spirit. No matter the final result, the work exists for its (his)story: intent, artistic gesture and narrative preside over form. The oral narrative is as important as the work viewed as the physical archive of a precise experience and encounter in time. Exposition en collaboration avec : Fonds de dotation KATAPULT, CNAP, La Région Pays de la Loire, DRAC Pays de la Loire 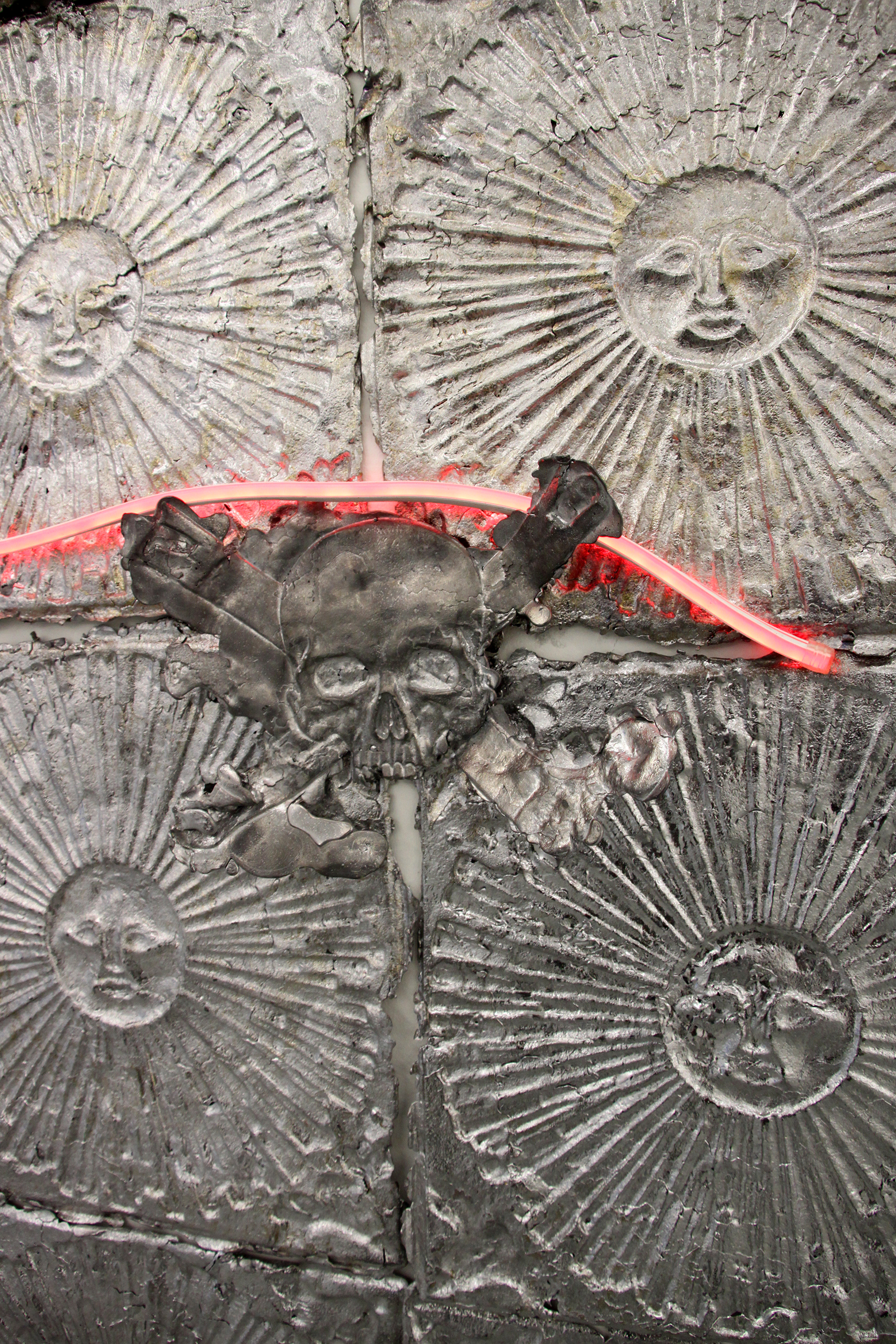 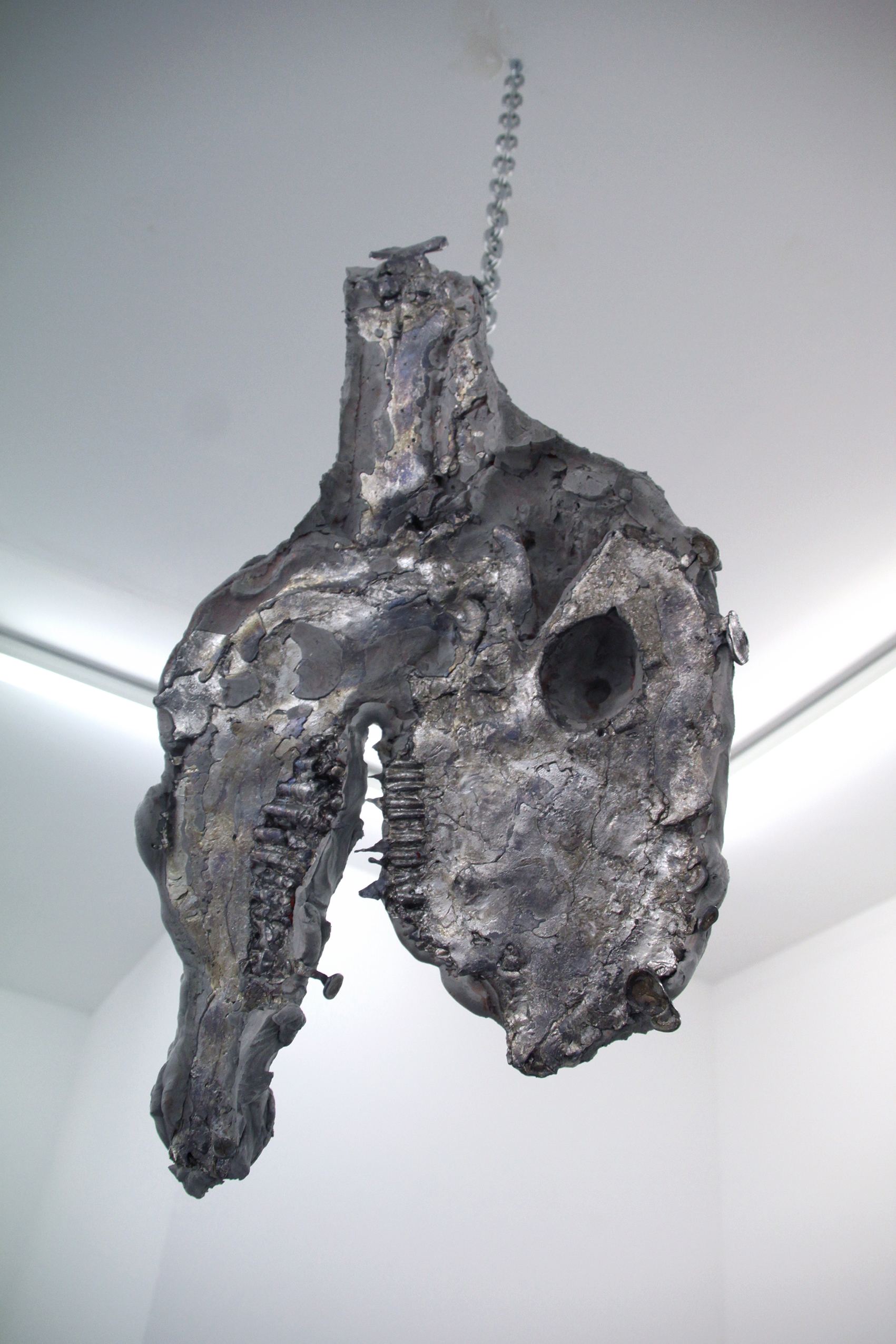